The Bay of Naples, with its handsome landscape, the rich fertility of its towns and villages and its relaxing climate has a reputation for being the Bay of Pleasure.

Romans came here to retire, and to pleasure themselves.

They were hopeful that they could spend their last days here to anticipate a happy death – before they were obliged to meet Charon the ferry-man on the banks of the River Styx across which everyone  must pass to reach the lands beyond – the Elysian Fields or the gloomy Underworld ruled by the God Hades.

The Roman Historian, Pliny, satisfying his personal curiosity and to add a new chapter to his Natural History and take up his responsibilities as a serious historian of the Imperial Julio-Claudian Dynasty, takes a boat to investigate the trembling land of the Bay of Naples where the volcano Vesuvius threatens to erupt.

You can accompany Pliny on this investigative journey in the company of Saskia Boddeke and Peter Greenaway. 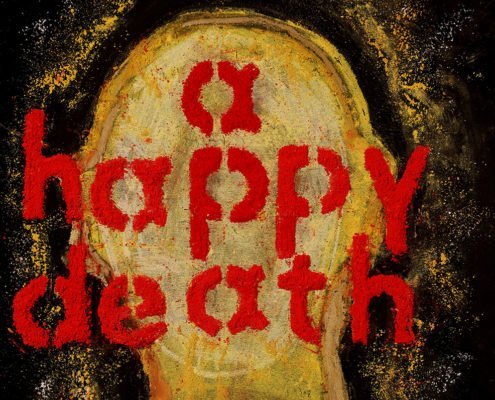 For Museum Archeologico Virtuale in Herculaneum, Saskia Boddeke and Peter Greenaway create an immersive art installation inspired by Roman history and the Vesuvius catastrophe of 79 AD. Using multi-media tools, the speciality of director Saskia Boddeke, the visitor is embraced by a poetic world of sound, music and projection.

In two rooms, the Green Room and the Black Room, Boddeke persuades us into a story,  based on historical facts about the Julio- Claudian dynasty and in particular on Marcus Agrippa and his narrated desire to die in a room especially created for that purpose, the  Black Room in his villa in Boscotrecase.

Contemplations about A Happy Death and the narrated particularities from the lives of the eighteen chosen members of the Julio-Claudian dynasty, all carefully connected by blood ties, is told by Pliny the Elder (Peter Greenaway).

The heart of the installation is a video created by Boddeke, of ‘Pliny the Elder’, richly elaborated with animated drawings and writings, that makes this film an extraordinary artwork.

Boddeke decorates the Green Room with eighteen figures, the representatives of the Roman rulers from the period around the birth of Christ.

The figures are relief artworks created by Greenaway and based on his ‘Body Parts’ templates, the basis for many of his painted works.

The Black Room, with a reference to the river Styx, houses the video projection of Pliny the Elder.

Two giant figures, Pluto and Ceres dominate the room. They overlook us humans and guard the exit to the next life. 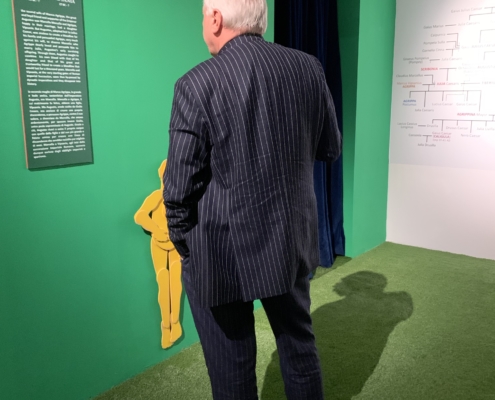 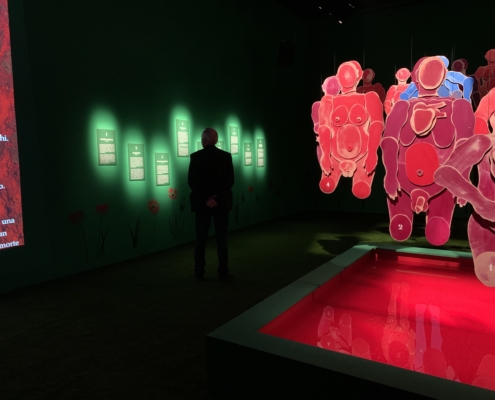 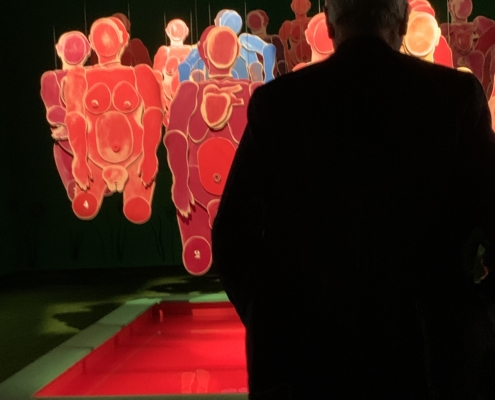 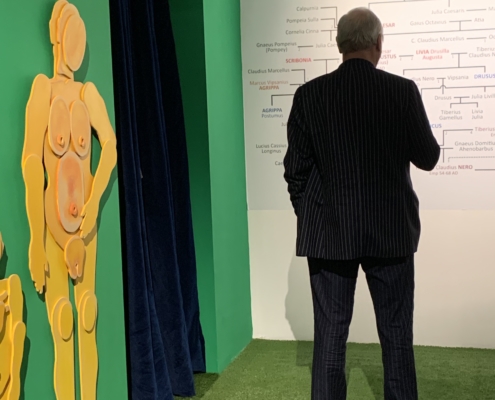 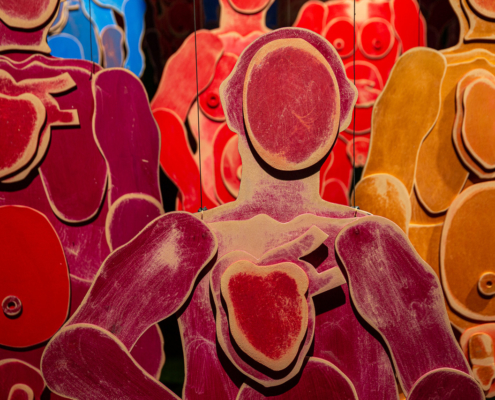 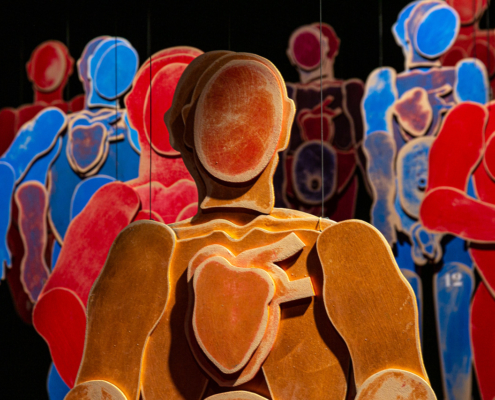 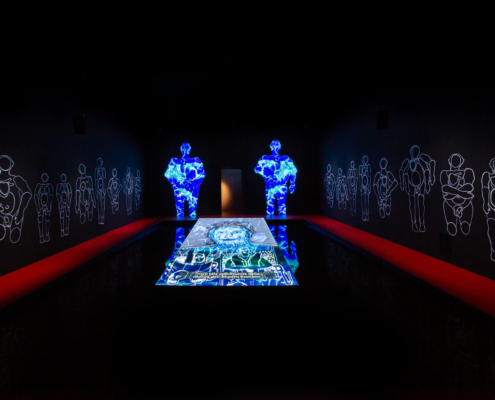 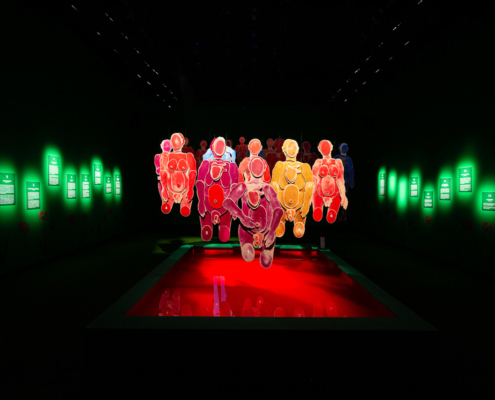 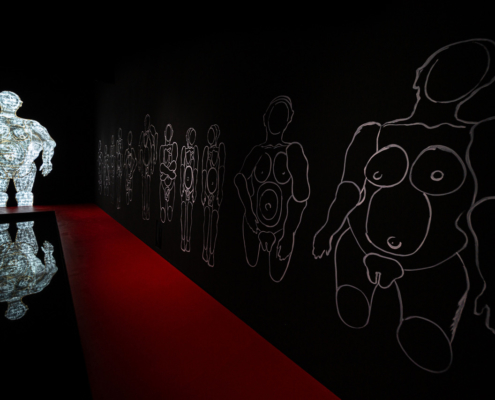 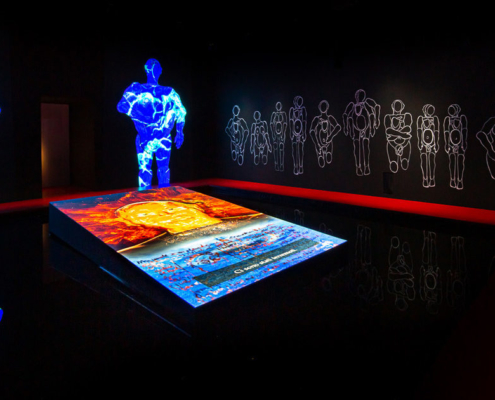 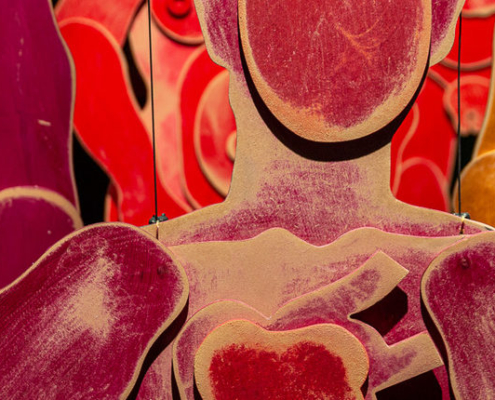